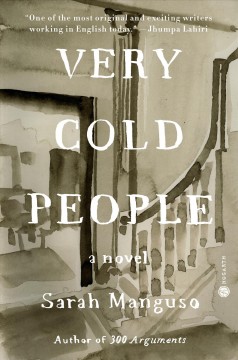 View all formats and editions (2)

My parents didnât belong in Waitsfield, but they moved there anyway. My mother answered the first knock at the door of the new house, expecting a casserole. Weâd painted the house Evening Fog, she told me, but the woman from across the street wanted to know why weâd painted it purple like Italians. Some people wore their difference honestly, but my parents were liars, illegitimate Waitsfielders, their off-Â­whiteness discovered only after the paint had dried. By the time I was born, the house had faded to the color of dirty snow.

The oldest houses in Waitsfield were older than the town and bore plaques to mark their age. Generations of families had been born and died in them, and the townâs six graveyards were populated mostly by children. Over the centuries the slate stones had eroded and sunk in the dirt, and they looked like gray, crooked teeth inscribed with little lambs and angels.

On the way to school I walked past a three-Â­hundred-Â­year-Â­old mustard-Â­yellow saltbox that my mother admired for its leaded glass windows and historically correct paint color. It probably had all the right antique fixtures inside, big sooty hearths and Indian shutters, visible proof of connection to the first, best people.

My mother referred to western Massachusetts as out west, and I was mostly ignorant of the geography beyond our neighborhood. Three-Â­quarters of the town stayed unknown to me, and that mystery drummed up a sense of scale. To this day I couldnât tell you how to get to the Lodge School, where the rich kids went. It was just there, somewhere, in those ten square miles, not for me to find.

I often asked my mother to drive us down to the part of town where every house had a plaque. It looked like a movie set. I knew a girl whose house had been used in a television ad for a clothing store. The ad was shot in the spring, and the crew had sprayed the lawn and the windowsills with sticky fake snow.

At home, my mother cut out wedding announcements from the Courier, the only paper in town. Maybe the groom was a Cabot, and the bride was an Emerson, and they sat on the boards of libraries and museums. My mother didnât know these people, but she liked the way they looked on our refrigerator.

She also liked to study an old typeset record of the townâs census, turning the well-Â­handled pages as one would a beloved picture book, but there were no pictures, just lists of names and addresses. She cross-Â­referenced the addresses with real estate listings in the Courier each week. Sometimes she took me to look at the big old houses. I never saw any people, just the houses, big Georgian colonials with widowâs walks and little gabled windows like third eyes opening.

I liked the estates, too, especially on Pond Road, which my mother told me was the most expensive street in town. Pond was a dead end, so it took some persuading to get my mother to drive the length of it and turn the car around, but when I reminded her that weâd never seen another soul walking or even driving around there, she could be tempted. Those houses werenât old. They were just enormous and ornate, with statuary and foreign-Â­made cars. A couple of them were always under construction and hidden under blue tarps.

I recognized the difference between the houses that were the oldest and those that were merely the most expensive. I liked the old houses, and I swooned over the girls and boys at school with names like Verity and Cornelius. I knew that I could never build the kind of relationship with money that the people in those stately, drafty, oldest houses enjoyed. I didnât even bother trying to infiltrate them. I worshipped them from a distance.

In our house the old paint on the windowsill had its own sweet smell, different from the wall paint. I felt all around the window sash to find a draft, but there was none. The cold was just everywhere. After the monthly mortgage payment, my parents had almost nothing left over, and we had to be careful.

For one thing, the bathtub had to be filled to the height of my hand, and no higher. I pressed my fingertips into the bottom of the tub, not knowing where my hand ended and my wrist began.

One summer I found a green garden hose on the ground next to a neighborâs house. The hose had been left on. I tried to calculate the amount of water that had been wasted. What are we gonna do? I asked the other kids. They didnât answer. Adrenaline spilled into my blood. Water poured into the muddy ground.

An old Irish cable-Â­knit cardigan with leather buttons hung in the downstairs coat closet, which smelled of hot farts and smoke. If anyone ever needed a sweater, they could go and put on the warming sweater, which was its name, as if other sweaters were merely decorative.

My mother kept the house just cold enough for me to need to wear the warming sweater over my regular sweater, and she cut just enough plastic wrap to cover the diameter of a dish.

I sat on the carpeted floor with my back against the radiator. It slowly bruised me, and if the heat came on, it turned my skin red in columns. A sheet of rigid plastic leaned between the radiator and the wall. It was meant to reflect heat back into the room.

Autumn brought with it the slap-Â­clatter of crows, fire smells, leafy sweet-Â­rot. New corduroys, cold air, brown paper grocery bags folded over schoolbooks. Writing on the first Â­pages of notebooks, September 7. September 8. September 9, never sure how my handwriting should look.

We had two sugar maples in the backyard, and my mother liked them best because their leaves turned bright red, the farthest possible from their original green. One of the maples got sick, and she hired a man to cut it down. She said that the man had come and started cutting, and that sheâd stopped watching him, and that when he came back to the house to get paid, she looked again and saw that heâd cut down both maples. Dead and gone. She would mourn those red trees the rest of her life.

When I walked home from school, I picked up leaves that were gold-Â­specked crimson, green-Â­edged vermilion, purple-Â­black. I picked everything up, pebbles and matchbooks and little things people dropped. In December, I picked up evergreen branches and taped them to my bedroom door and made decorations, a little Christmas garland just for me.

One day my mother emptied my jacket pockets and found two half-Â­used matchbooks and screamed at me. I could have started a fire. But I wouldnât have wasted a match to start a mere fire. Iâd found what someone else had thought was trash, so I took it.

On winter mornings the light spread like a watery broth over the landscape.

My father drove a used silver sports car whose turn signals didnât work. Even in the winter, he stuck his arm out the window and signaled left or right as if he were pedaling a bicycle.

He started the car and let the motor run while I got into the passenger seat and wrapped the twisted black seat belt around my lap. He scraped the windshields and the side windows with a beveled piece of clear plastic. I liked the sound of it, like a giant filing his nails. The bits of scraped-Â­off ice looked like fluff; the air was too cold to melt it.