How to write songs on guitar : a guitar-playing and songwriting course / Rikky Rooksby. 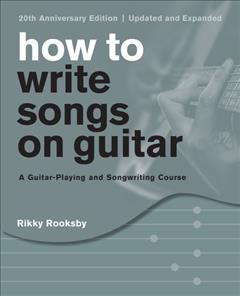 View all formats and editions (3)

Rikky Rooksby is a guitar teacher, songwriter/composer, and writer on popular music. He is the author of How to Write Songs on Guitar (2000, revised edition 2009), Inside Classic Rock Tracks (2001), Riffs (2002, revised edition 2010), The Songwriting Sourcebook (2003, revised edition 2011), Chord Master (2004, revised edition 2016), Melody (2004), Songwriting Secrets: Bruce Springsteen (2005), How to Write Songs on Keyboards (2005), Lyrics (2006), Arranging Songs (2007), How to Write Songs in Altered Guitar Tunings (2010), and Songs and Solos (2014). He has also written fourteen Fastforward guitar tutors and arranged over three dozen chord songbooks, including The Complete Beatles. He has written entries on rock musicians for the Oxford Dictionary of National Biography, and published interviews, reviews, and transcriptions in many UK music magazines. He is a member of the Society of Authors, Sibelius One, and the Vaughan Williams Society.