New Search INSPIRE Indiana State Library Find a Library Near Me About Evergreen Which OverDrive Link Do I Use?

Dangerous girls : the taste of night / a novel by R.L. Stine. 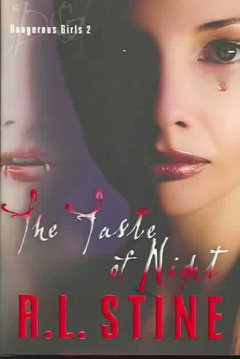 View all formats and editions (5)

The Taste of Night By Stine, R. L.

The Most Dangerous Day

Summer can't be over already. Do I really have to leave Camp Blue Moon?

That's what Destiny Weller was thinking on the day she started to become a vampire.

She watched the yellow bus rumble away, carrying the last of the campers with it. The bus bounced over the narrow dirt road, then turned and disappeared into the trees.

"Hey, we're free!" someone yelled. "The little animals are gone!"

"Who has car keys? Can we get a keg? Can we at least get some six-packs?"

A red afternoon sun was sinking behind the trees. The air suddenly carried a chill, a hint that summer was nearly over.

Destiny turned and searched for her sister, Livvy. The counselors gathered around the grassy hill that overlooked the road, laughing and joking, hugging each other, celebrating the end of the camp season.

She spotted Livvy in a circle of girls clustered around Renz. He was flirting with them, hugging them one by one. All the girls adored Renz, and why not?

He was so good-looking, tall and tanned, with that wavy, black hair, those dark, bedroom eyes -- devilish eyes -- that irresistible smile. So charming and funny and . . . grown-up.

Not like the other guys in camp, Destiny thought. Not like the counselors and junior counselors whose idea of a good time was going skinny-dipping in the lake after lights-out, or putting snakes in each other's beds.

Renz was too sophisticated for that.

Destiny didn't really know much about him. She knew that his real name was Lorenzo Angelini, and he had just a hint of an Italian accent, which made him even sexier. He had been hired as head waterfront counselor. But when Uncle Bob, the owner of Camp Blue Moon, suddenly took sick just before the kids arrived, Renz became head counselor.

"I see who you're staring at." Nakeisha Johnson came up behind Destiny and grabbed her shoulders, startling her.

"Summer's too short," Nakeisha said. "Think I could follow him home? Maybe he'll adopt me."

"Actually, I'm watching my sister," Destiny said. "Do you believe those short shorts? You can see half her butt."

Nakeisha gazed at the crowd of girls around Renz. "Well don't turn green or anything. You know you're jealous. Renz spent so much time with Livvy."

"All the guys spent time with Livvy," Destiny replied. She watched Renz give Livvy a farewell hug, holding her close, his hands all over her bare back.

"Stop shaking your head," Nakeisha said. "How can identical twins be so different?"

"I told you. We're fraternal. Not identical," Destiny said.

A yellow jacket buzzed around them. Destiny swatted it away. High in the darkening sky, a flock of honking geese flew in perfect V-formation, making its way from Canada. On the road below, the camp station wagon sped past, tires spinning up dust, jammed with counselors heading to town to buy beer.

"Everyone's acting happy, but this is so sad," Nakeisha said. "Tomorrow we'll all go our separate ways. I won't see you anymore." She turned and wrapped Destiny in a hug.

Destiny hugged her back. "You've been such a good friend. I really am going to miss you."

Both girls had tears in their eyes.

Nakeisha wiped tear stains off her cheeks. "I just got something in my eye, that's all. It's not like I hate saying good-bye or anything. You've got my e-mail address, right? And my cell number?"

Destiny nodded. "We can Instant Message each other."

"Maybe you can come to New York for Thanksgiving?"

Destiny laughed. "Yeah, if I win the lottery or something."

"Hey, know what? I'll be doing college visits in September and October. I know I'll be in Boston. Maybe I can come through Dark Springs."

"Excellent!" Destiny said. Over Nakeisha's shoulder, she saw Livvy, cigarette in hand, lip-locked with Cory Field, one of her many admirers. His arm around her shoulders, Cory began to lead Livvy toward the trees by the lake.

Her sister turned and took a long drag on the cigarette. Cory kept his arm around her. "Hi, Dee. What's up?" Livvy asked.

Destiny stared at her sister. Livvy did everything she could to look different from her twin. Destiny wore her hair short, so Livvy kept hers long, letting it flow down over her shoulders. Destiny hardly ever wore makeup, just a little blush and lip gloss from time to time. Livvy liked purple or dark red lipstick, and her biggest suitcase this summer had been filled with eye makeup.

Livvy had one nostril pierced, usually wore three different earrings in each ear, and loved to wear rings on every finger. She wanted to get a butterfly tattoo on her shoulder, but held off, knowing her dad would give her all kinds of grief.

Destiny would never admit it to anyone, but she secretly admired her sister for having so much style. Livvy was always trying to give her a make-over. One night last year when they were juniors, she allowed Livvy to work on her -- lipstick, mascara, even streaks in her hair.


Excerpted from Dangerous Girls #2 by Stine, R. L. Excerpted by permission.
All rights reserved. No part of this excerpt may be reproduced or reprinted without permission in writing from the publisher.
Excerpts are provided by Dial-A-Book Inc. solely for the personal use of visitors to this web site.