New Search INSPIRE Indiana State Library Find a Library Near Me About Evergreen Which OverDrive Link Do I Use?

Return of the rogue / Donna Fletcher. 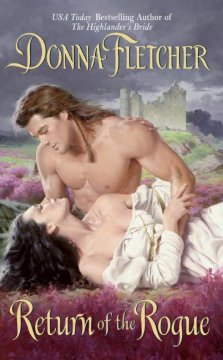 Return of the Rogue

She twirled in circles, her skinny little arms stretched out from her sides and a broad smile on her thin face. She would twirl and twirl and when she stopped, her head still spinning, the barren moor would magically dance in front of her eyes.

She laughed with glee and clapped her small hands until the dancing stopped, then went in search of wildflowers. The yellow ones were nice, but the violet ones were her favorite. The pretty color matched her eyes, or so her mum told her when they picked flowers together.

A frown suddenly captured her face. She wished her mum were with her today but she had too much work to do. Though her stepfather, Calum Tannach, expected her to help her mum, her mum would often chase her off to have fun, joining her now and again when she was certain Calum wouldn't learn of it.

Today her mum had shooed her off, telling her to have a day of fun since it was a special day. It was her birthday. She was eight years old today.

A smile quickly reclaimed her thin face. Her mum wouldn't want her to waste her birthday feeling sad. She would be waiting to hear of her fun day.

She rushed around picking flowers. They would make her mum smile. Her mum didn't smile very often. She wished she would but she didn't, but the flowers never failed to bring a smile, even a small one.

She stopped, tilting her head to the sky. Was that thunder? It was cloudy and gray. Then she heard the distant rumble again, only this time the ground quaked beneath her small feet. She stumbled backward; clutching the few flowers, she cast a glance across the moor.

Warriors! her mind screamed, and fearing they could be from a marauding clan, she did what she had been taught—she ran.

She clutched her flowers tighter as her skinny legs pumped faster and faster, the quaking growing stronger beneath her pounding feet. She told herself to keep going, don't look back, but fear forced a quick glance over her shoulder and the shock of the riders bearing down on her caused her to stumble.

She landed hard on her backside and instinct had her crawling backward away from the riders as fast as she could.

The ground shook and the thunderous roar of horses' hooves vibrated the air and tears filled her violet eyes as she struggled to avoid the rush of horses.

With a sudden yank, she was snatched off the ground, swung up in the air and planted with a thud in the lap of a large warrior. He reined in his horse sharply, holding her tight, and then slowed the animal to a trot.

She sat in shocked silence, too frightened to move or speak, though not to stare at him. Her first glance had her thinking he was the devil himself, his dark eyes matching his dark attire, his look grim and his mouth angry.

"Look," he ordered, his hand grabbing her chin and forcibly turning her head. She began to tremble. The horse stood at the edge of a cliff that she knew dropped off sharply to the North Sea.

"That's where you were going."

She shivered at the thought, tears pooling in her eyes until they spilled one by one down her thin cheeks. She would have died if not for the warrior, never to see her mum again. She stared at him, unable to speak and not knowing if she should, since she recognized him. He was Cavan Sinclare, eldest son of Laird Tavish Sinclare of the Earldom of Caithness, a fierce warrior.

He hoisted her up and off the horse, depositing her on the ground. He leaned his face close to hers, so close that his warm breath tickled her nose when he spoke.

"Watch what you're doing, lass. Next time someone may not be there to save you."

Honora woke with his words resonating in her head. It was always that way with the recurring dream, near twelve years now. She stretched her arms above her head, sighed and let the dream fade. She need not be thinking of the past today. Today she began her future. Today was her wedding day.

She snuggled under the wool coverlet, the sun yet to rise, and wondered for the hundredth time if this was right for her. But then, what did it matter? The choice wasn't hers. Her stepfather had arranged the marriage; she had little to say about it.

She had never imagined marrying a Sinclare. Actually, two years ago she feared marrying one; the one Sinclare she had prayed she would never set eyes on again. Her stepfather, Calum Tannach, had other ideas. He approached laird Tavish Sinclare, to offer her as wife to his son Cavan. Calum had touted her virtues and how she would serve the future laird well, being an obedient and dutiful wife. He had used a strong hand in raising her, he said, and guaranteed that she would not flinch if her husband saw fit to do the same.

He had been right about that. Calum Tannach had not only forced his stepdaughter to take his name when he wed her mother, but used a forceful hand on her more often than Honora cared to remember.

She would never have been able to defy her stepfather and refuse to wed Cavan, and so she was relieved to receive the news that Cavan had no interest in wedding her. He claimed she lacked strength and courage, and he wanted both in a wife. Her stepfather had been furious and, of course, taken his disappointment out on her.

Not enough strength and courage? She certainly had it that night when her stepfather delivered a good beating on her for not being good enough for Cavan Sinclare. He called her worthless and said it was a good thing her dear mother had passed five years before and was not there to witness the shame she had brought the family.


Excerpted from Return of the Rogue by Donna Fletcher Copyright © 2008 by Donna Fletcher. Excerpted by permission.
All rights reserved. No part of this excerpt may be reproduced or reprinted without permission in writing from the publisher.
Excerpts are provided by Dial-A-Book Inc. solely for the personal use of visitors to this web site.