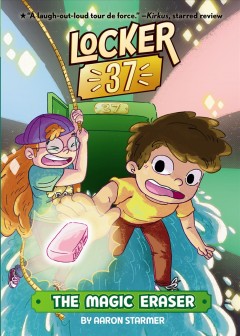 
Before the first day of fourth grade, Carson Cooper thought Hopewell Elementary was exactly like any other school. It had classrooms for math, art, and science. It had a cafetorium, which was a cafeteria during the day and an auditorium at night. It had a gym with a climbing rope and something called a pommel horse in it.

(A pommel horse is exactly like a regular horseâÂ­that is, if the regular horse only has two legs and doesnât have hair, or a neck, or a head, but instead has handles on its back and stands entirely still so that gymnasts can jump on it.)

In the front of Hopewell Elementary, near the stone steps leading up to the entrance, there was a big NO SKATEBOARDING! sign that was often ignored. Behind the school, there was a dumpster, full of things best left unseen and unsmelled.

From September through June, Hopewell Elementary was full of students and teachers, who were mostly nice, most of the time. Carson didnât love going there, but heâd been going there since kindergarten, so he was used to it. And he was used to thinking it was an entirely normal place.

It was not an entirely normal place.

In fact, Hopewell Elementary was the strangest, most amazing place in the universe. And thatâs saying a lot. The universe had pulsars, black holes, and indoor water parks in it.

Locker 37 made all the difference.

Â  Locker 37 was at the east end of the school, past the music room, in a dimly lit corner near a janitor closet full of toilet paper and laundry detergent. It was four feet tall, metal, and green. It had three slits in the door that worked as vents. It had a spinning combination lock with the numbers zero through forty-Â­nine on it.

On the outside, it looked like all the other lockers. So there was never any reason to suspect it was different on the inside.

But, boy, was it different on the inside.

Every day it was different.

Anyone who knew the combination knew that.

Â  âWelcome, friends, to the best year of your life,â Mrs. Shen said to Carson Cooperâs homeroom on the first day of fourth grade.

It didnât seem like an exaggeration. According to just about everyone, Mrs. Shen was the schoolâs best teacher. She told jokes that were actually funny. She held trivia contests. She showed YouTube videos in class. Having her as homeroom teacher guaranteed a good year. Being a fourth-Â­grader made things even better.

Fourth-Â­graders were the kings and queens of Hopewell Elementary. They were the oldest and wisest. They knew the schoolâs secrets. For instance:Â
Â
Always buy school lunch on taco day, but never, ever, ever on fish stick day.

Locker 37 can do anything. And by anything, that means ANYTHING.

Carson learned this last secret right after Mrs. Shen told him this would be the best year of his life. That was when his knee brushed against something. Reaching down, he found a folded piece of paper stuck with a wad of chewing gum to the bottom of his desk.

He peeled the paper off. He sniffed the gum.

Then he unfolded the paper.

It was a note.

You are now the keeper of the combination to Locker 37. Locker 37 has helped fourth-Â­graders at Hopewell Elementary for decades. We know it will help you, too.

If you or another fourth-Â­grader has a problem (any problem!), open Locker 37 and the locker will provide a solution. It wonât always be the solution you want, or expect, but it is guaranteed
to work.

Only fourth-Â­graders know about Locker 37.

So feel free to tell all your friends in fourth grade about it. Itâs encouraged!

But donât tell anyone younger. And donât ask anyone older for advice. Everyone who finishes fourth grade immediately forgets about Locker 37. You will, too.

In the meantime, have fun. And best of luck!

Sincerely,
Last yearâs fourth-Â­graders
Â
P.S. We almost forgot to give you the combination! Itâs 43-Â­12-Â­29.
Â
P.P.S. Oh yeah, and Locker 37 can do anything. And by anything, we mean ANYTHING! No big deal.
Â
P.P.P.S. Your life is about to get bonkers. Extremely bonkers.
Â
P.P.P.P.S. Feel free to chew the gum.
Â


Carson had a problem.

Actually, he had a few problems.

He had forgotten to bring his lunch, so he would have to buy lunch. And it was fish stick day.

He was sort of tempted to chew that watermelon gum. Yes, he knew it was gross, but watermelon was his absolute favorite flavor.
Â
Forget those problems, though. Because he had one problem that was bigger than all the others combined.

Carson had a stain on his pants.

It might not sound like much to worry about, until you realize where the stain was. It was in a place on Carsonâs pants where nobody ever wants to see a stain. Ever.

No, not his thigh, or his shin, or the back of his knee. You know exactly where it was.

Now do you get it?

Carson noticed the stain as soon as he slipped the mysterious note about Locker 37 into his pants pocket. The stain wasnât there when he got dressed in the morning, so he wondered how it could have found its way onto his pants.

Did he sit on something wet while riding the bus?Â

Did he bump into something gross in the hall?Â

Did he rub against something nasty on the bottom of his desk? Watermelon gum, for instance?

Ultimately, it didnât matter where the stain came from. All that mattered was that it was there. It was big, and dark, and splotchy. It made Carson want to scream out loud.

Mrs. Shen was still talking, so Carson held the scream in.

âIâd like to introduce our class mascots. Meet Finn and Gill,â she said as she pointed to a pair of goldfish swimming in a bowl on a table in the back next to the radiator. âWould anyone in class be interested in feeding them every day?â

A hand shot up and a voice called out, âI think Iâve shown how responsible I can be, as a founding member and president of the Junior Janitor Club. So I should be in charge of the fishies.â

âThank you, and nice to make your acquaintance, Keisha. Is anyone else interested in feeding the fishes?â

The question was met with silence. The other students already knew Keisha was the best person for the job. She was an overachiever of the highest order, and had been nominating herself for positions since kindergarten.

âItâs settled, then,â Mrs. Shen said. âKeisha will feed Finn and Gill. And Iâve also learned a little bit about her. So what about the rest of the class? I realize that many of you already know one another. But I donât know most of you. When I call out your name, tell me something interesting about yourself.â

What was interesting about Carson? He didnât have the faintest idea. All he could think about was the embarrassment on his pants, and all he could do was stare at it. The stain was both terrifying and hypnotizing, and so he hardly heard Mrs. Shen when she called out, âSarah Abramson.â

And he hardly heard Sarah when she responded, âHi. Iâm Sarah, and I like to juggle.â

He certainly didnât see Sarah pull a pencil, a glue stick, and a ruler out of her backpack and start juggling them while still sitting at her desk. Which was too bad, because she was circus-Â­level good. Mrs. Shen cheered and clapped. So did most of the class.

Except for Carson. His hands and eyes remained on his lap. So when Mrs. Shen called out other names, in alphabetical order, he also missed thatÂ .Â .Â .Â

And Nina Camacho knew more about lemurs than most lemurologists (which is the technical term for a lemur scientist, right?).

Inevitably, it was Carsonâs turn. When Mrs. Shen called out his name, Carson was still distracted. Thatâs why he answered with one word.

Carson was too embarrassed to say anything else, so he nodded.

âI like pants, too,â Mrs. Shen said with a warm smile. âOne of the worldâs best inventions for hiding your underwear.â

The class laughed. Carson lowered his head. And Mrs. Shen saved him from more embarrassment by calling on other students.

Luckily, no one in class seemed to notice the stain. Carson knew that it was only a matter of time, though. Getting rid of the stain became his number one priority.

He pulled the note out of his pocket and read the most important part of it again.
Â
If you or another fourth-Â­grader has a problem (any problem!), open Locker 37 and the locker will provide a solution.
► Shelf Browser
► MARC Record