New Search INSPIRE Indiana State Library Find a Library Near Me About Evergreen Which OverDrive Link Do I Use? Reference USA 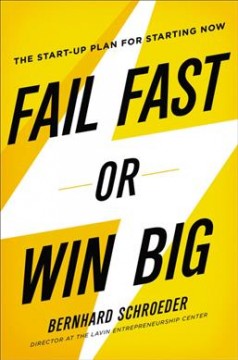 Why Today's Entrepreneurs Need to Read This Book

Fail Fast or Win Big is not about failing. It's about embracing a new

way of thinking about creating and launching a company. In the startup

plan that will be out of date before your idea ever comes to market.

it in the real world. And you don't have to, either--not with new

sources of capital, such as crowdfunding, waiting to be exploited.

You still need to acquire a deep understanding of the marketplace

and your customers so that you are more knowledgeable than your

potential competitors, but you also have to beat them to the punch.

You are much better off launching a minimally viable product or service,

one that satisfies your core customers' needs, and adjusting it on

the fly after you see what's attractive about it and what isn't. Fortunately,

the tools are available now to let you get started in 90 days, if

not less; after all, your time is the most important investment you

make. If your product or service doesn't work out, you've saved yourself

plenty to win big with the next idea.

The LeanModel Framework will help you move as fast as you

need to go. It's the culmination of my work with some of the most

talented people in the world during the past 20 years. Some of those

people were fellow professionals in our integrated marketing agency,

CKS|Partners, which grew very fast, accelerated through an initial

public offering (IPO), and then was sold two years later for more than

$300 million. Other people I met through "corporate entrepreneurship"

where, working together, we spun out divisions and/or new

products and services very rapidly. The last group I was in consisted

of entrepreneurs launching start-ups, mostly on the West Coast.

While everyone seems to recognize the end result when companies

become successful, almost no one remembers the lean days that

usually preceded that success. That's when these companies were

started in homes, garages, warehouses, and on college campuses.

Looking back now, I see that almost all these successful companies

and then seeking customer feedback. With that feedback, they

then pivoted, evolved, or abandoned the idea.

The philosophy behind the LeanModel Framework is one I

of Programs at the Lavin Entrepreneurship Center, San Diego

State University, and as a lecturer for several entrepreneurship

courses. Early marketing work in my career with Fortune 500 companies

convinced me of two things: (1) Large companies move too

slow; and (2) I could not work with slow companies. Instead I looked

for opportunities with companies that had a desire to move fast, as

they were taking advantage of new market opportunities. I moved

away from the General Motors accounts and I embraced the Kellogg's

and Nikon assignments that were rapidly prototyping marketing

strategies to introduce new products or services, and they were grabbing

When I did work with some automotive companies, I welcomed

the chance to help craft new marketing or customer solutions, for

smaller, nimbler companies at the time like Hyundai, Mitsubishi, and

Mazda. Later, in Silicon Valley, the challenge was to sharpen the education-

marketing focus at Apple and define the online marketing

strategy for a growing company called Nike. Or, it was taking a small

regional craft beer named Widmer and rolling them out nationwide

in bottles for the first time ever.

In choosing to work with nimbler, faster-moving companies, I realized

it was not about me or my ego. I thrived on the notion of seeing

a market opportunity and of moving fast to win big. And I loved

an attempt to win big.

I have worked with some great companies, both large and small.

Do you know what made them great, beyond inspirational leadership

and usually an amazing culture? It was a powerful sense that they had

a meaningful purpose and a destiny, but that in order to fulfill that

destiny, they had to move fast. They recognized that moving too

survival. In other words, their core belief was that if they did

not move fast, they would ultimately fail.

Let me give you some examples of what the LeanModel Framework

looks like in action. In the early 1990s, I was tasked with helping

lead a team working with a small start-up called McAfee. The company

made anti-virus software, but it was a very small player in a marketplace

dominated by larger software companies. As we reviewed

potential strategies, we noticed that corporate IT managers routinely

looked for additional information or support on bulletin board systems

and share information and software solutions. Since this start-up

distribution channels, we recommended they upload their

software to the BBS networks, distribute the software for free (for 30

days), then ask the companies to pay for it after it had been used by

their IT employees. This was amazingly successful, and it created a

company with more than $2 billion in revenue today. More important,

the company's business model and method of distribution

changed the way software could be distributed and purchased.

There was another opportunity to help figure out a company's

business model back in the early Internet days. We met with the

Yahoo! founders when they were still on Stanford's campus, running

the early version of Yahoo!'s website on the university's servers. That

was a lean start-up. Honestly, we really could not figure out the business

traffic). One thing we did notice was that the website was not well

designed from a user-interface point of view. Not only was the company's

branding weak, it was almost impossible to find something

quickly, as the website was using way too many links and had poor

Yahoo! did not have much money at the time, and they asked us

if we would help them in exchange for some equity. We did. We redesigned

the user interface and overhauled the website design. During

the next six weeks, we created a more powerful, simpler user

interface that was more logical and better ordered. But then everyone

had an opinion about the new design versus the old design. And

everyone was nervous. We convinced the founders to let the customers

decide. So, alternating website visitors were served up the new

they received the old version of the website. They were asked to vote

on which website design was easier to navigate, and more than 50,000

website visitors voted in the first 72 hours. The majority voted for

the new design, much to the founders' dismay. So, we launched the

new website, and Yahoo! took off. We then began refining the Yahoo!

business model by adding the search function and eventually an advertising

This notion of testing products with customers and getting feedback

is critical; I call it customer truth. Customers are not always right,

but they are never wrong.

In the mid-1990s, I had probably my most memorable experience

reflecting the mentality of the LeanModel Framework. The

agency office in Portland, Oregon, in search of a marketing agency

and strategic partner to help him grow the business. He had launched

product), and it was gaining some traction with customers. So

my creative director and I agreed to go to the meeting, which was

about three hours away. Driving in what turned out to be a downpour,

just terrible weather, I was regretting my decision.

When my creative director and I arrived at the company's location

in a seedy part of Seattle, in a rundown warehouse district, my

instincts were telling me to leave. We entered the warehouse; there

were no real offices, just employees all together in one large room.

Water was dripping from the leaky roof. A dog wandered by. The

desks were doors mounted on two by four's. It sure looked like no

one was spending money on anything. Then we met the founder. He

brought us up to date on the past six months, and told us what he

needed from us. Which was a lot.

The website and daily operations were working. Orders were

coming in every day. They just needed more awareness in their target

marketplace. He then explained his big-picture vision. His strategy

type of product and then, once that happened, sell those same customers

many different kinds of products.

I'm not going to lie to you; initially I did not buy the big-picture

vision. But I was fascinated by how lean the company was being run

and how aggressive it was in trying to improve its business model.

We had an amazing meeting. At the very end, the founder asked us if

we were seriously interested in changing the world. To be honest, I

did not know what that meant. But I knew beyond a shadow of a

doubt that this start-up was going to move fast. I had no idea if it

would win big, but based on the founder's strategy of grabbing customers

quickly, it was either going to win big or fail really fast.

As we drove back to our offices, three hours in more rain, we both

the usefulness and the potential of the Internet. Win or lose. When

he called the next week, we told Jeff Bezos we would work with him.

If you are ready to fail fast or win big, read on.